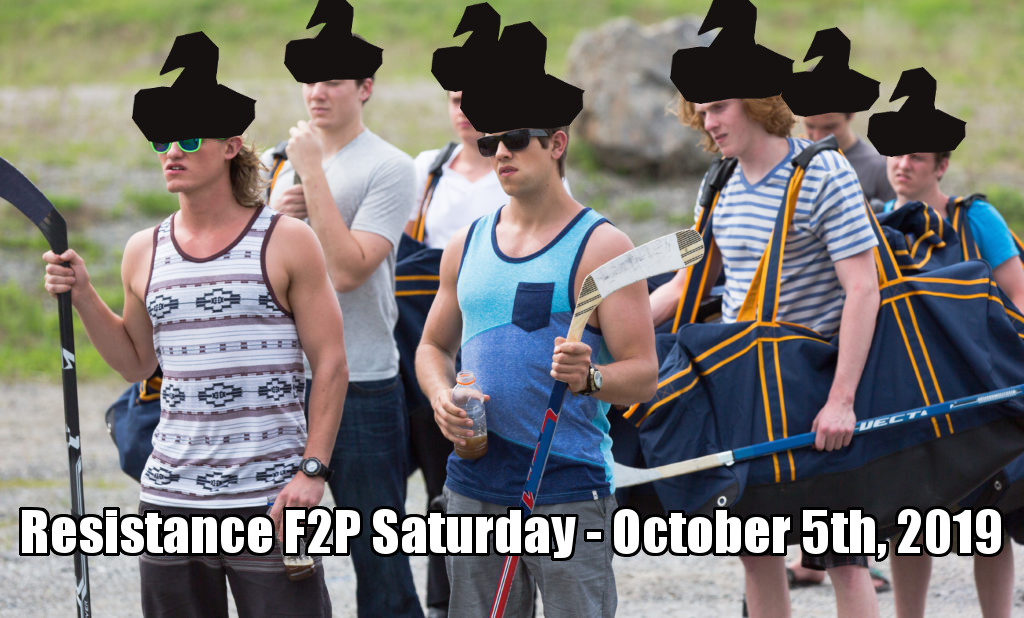 Today the Resistance Uprising showed up with 45 Long Haired Hockey Players to get pucks deep and get pucks in the net against the Pure Community.

We were at Fat Tony’s getting our pre-game meal of a pepperoni and sausage pizza, a pitcher of beer and vagina when the Green Men rushed us. After some sweet passes, hard hip checks, and some great puck play, we were up 15 when the Curry Clan decided to try to get involved. Silly Curry Clan, hockey only has 2 teams playing on the ice at once.

We saw three clans in a tilly so we decided to make it into a donnybrook and dove right into the pond (later finding out that the pond was inappropriate for ice skating for our hockey practice).  We focused on the Purple Pansies initally, making them run away after making their mascara run from crying after seeing us (yeah we piped them once before in the past, they’re an old flame). We then started pushing the puck down the ice and focused on the Green Men. But they broke down like a defense broke down when we’re pushing pucks deep down the ice. And I don’t know what the fuck Ape Clan and Chumbucket clan were doing but it obviously wasn’t working as we were able to physically dominant all of these clans. Eventually Pansy Clan and Chumbuckets began to try to do some passing practice but the alphas that we are, we quickly and abruptly took all their pucks and got them in the net. Green Men  then tried to get some pucks from us but we dropped the gloves and one punched the fuck out of them knocking them out in the most dehumanizing way. Ape clan then tried to come up behind us to sucker punch us but because we condition our hair with the blood of our enemies, we turned around and just killed them with our good looks.

We met Ape Clan in the center for the faceoff and quickly got control of the puck. Not liking how physical we were with our play, they dropped the gloves and made a huge mistake. We pushed them against the glass, pulled their jersey over their heads and just laid the fucking pain down. But respect for fighting Ape Clan.

Thanks for the sweet hockey games boys, see yall tomorrow.